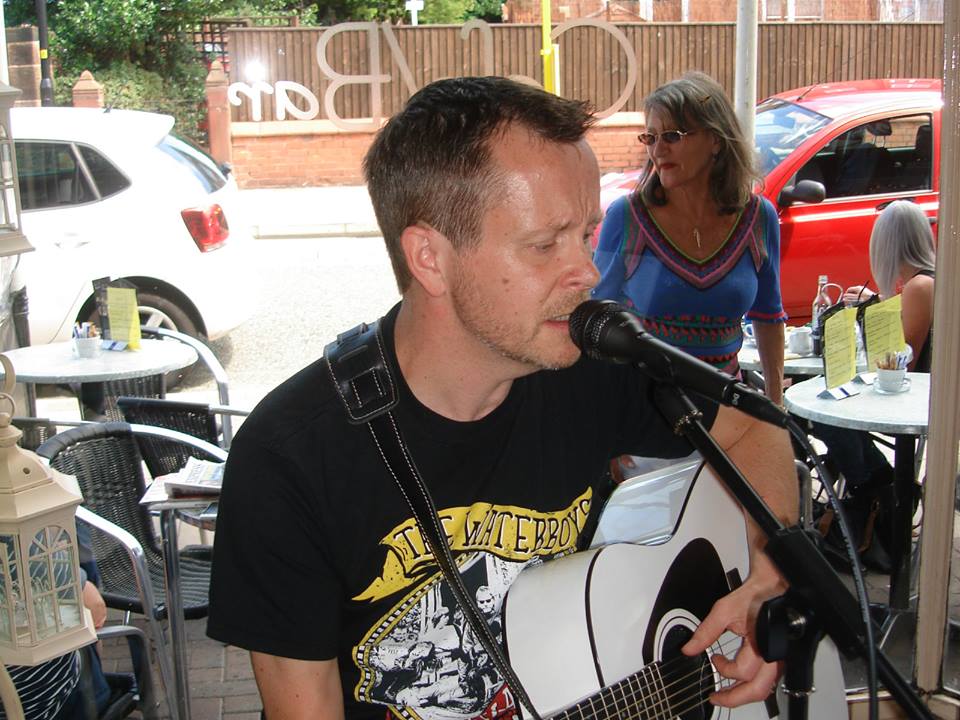 Singing, songwriting, performing – music in general in fact – has taken a back seat this week, as I’ve been working full time in my other guise as the friendly shopkeeper at Island Electrical. It’s been a quiet week, due to the fact that Hoylake – where the shop is located – is currently hosting the 2014 Golf Open at the Royal Liverpool golf course. Yes, you’d think that with footfall past the shop increasing several thousand-fold, business would be booming. But no: hosting the Open is great if your business is a bar or restaurant, but not much cop if you’re an electrical retailer or pet shop – there’s not much call for a steam iron or dog ball thrower on the 18th tee, I guess.

Anyway… a couple of weeks ago, I played a daytime gig at Slinky’s Café Bar as part of the Wirral Festival of Firsts International Arts Festival. I was performer and host. I invited my friend Julie’s daughter – the very talented singer/songwriter Tabitha Jade – down to play a session. Talking of whom, here she is in her latest video – oh if only I was as confident and telegenic!

I opened the day with a half hour set of my own, and played a few of my own songs, including my latest composition Gary’s Theme (Lil Ol’ Pub Singer Me). I decided that, rather than introducing myself in the usual manner, I’d have my own theme tune, much like the running gag on Little Britain about Dennis Waterman wanting to write the theme tune to whichever TV show he’s acting in.

So after the gig, Julie and my wife are talking, and Julie says “so I see Gary has started writing his own songs”. Clearly, she’s one of the seven billion or so people in the world who don’t follow my blog. I wrote my first song – according to the cassette tape that it’s recorded on – a quarter of a century ago in 1989. I’ve got almost 150 completed songs in my back catalog – not quite as many as Lennon and McCartney are credited as writing for the Beatles, but a whole lot more than George and Ringo combined. And of these, I’ve actually performed over 50 in public over the past few years.

I’ve said it before, but I really must get round to recording them one day soon…